We woke up late in New Orleans and grabbed some Taqueria Guerrero with Byron and Cory (of Hat Talk) before hitting the road towards Hattiesburg. The night before, we ran out of our pressed "EPs" cds (we're picking up more in Philly), so before we left NOLA, I spent some time burning our self-titled EP and throwing them in some cardboard sleeves I brought (special thanks to Faith for some sweet designs on the sleeves). After I threw back a Purple Haze, we threw our stuff in the truck and headed east. We got into H-town #2 and grabbed a BK Veggie Burger and a Big Fish. I asked for a veggie burger and the cashier said "do you want a veggie burger or a veggie whopper?" and when i asked what the difference was, she said "the veggie whopper's got meat". It made no sense, so i just grabbed the original. We made it to the venue with our bellies full a little bit early, so we lounged back in the ride and watched some Neko Neko Films. After a good laugh (and i think sean cried a little too), we started loading in and chilling hard with The Squirms inside the Thirsty Hippo, listening to a baseball game on the venue's sound system. So this apparently was a big deal. Southern Miss' baseball team (who wasn't even ranked) was playing UT and they were in the lead for most of the game and then at the end, they lost to us Texans. So that night, we were enemies to the general population. People started to file in shortly before (and during) the Squirms' energetic and rockin' set. After they finished a really cool jam loosely based on a Rolling Stones song, we got ready to play, super nervous due to our home-state's tasteless domination only an hour or so prior. Surprisingly however, we were received warmly by the nice little crowd (great for a Sunday night in a college town during the summer) and ended up getting rid of a good amount of the cds I burned. We stayed over at Jed and Will's house (of the Squirms) and stayed up drinking, talking, eating tortilla chips with a hint of lime, listening to some records from Will's EXTENSIVE collection (we were introduced to the wonderful Orange Juice), and watched a few short films. We woke up surprisingly late, grabbed some cantaloupe, and now we're on the road to Birmingham, Alabama to play at Greencup Books with The Squirms and The Markov Chain tonight. The wonderful Veronica is housing us for the night and we're both super excited to chill with her. We just got into Alabama and i'm munching down on some Swedish Fish. 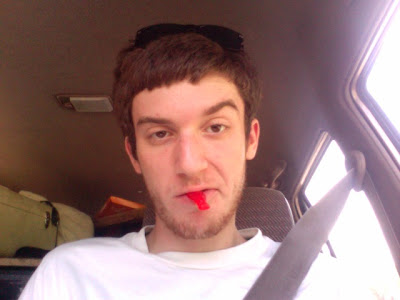 hahahaha it looks like i'm driving and doing this. Go Macbooks!
Posted by Chris at 3:52 PM