This coming tuesday (September 1st), Giant Cloud and we will be playing a show at Circle Bar with Austinian friends, Paper Moons. The experimental folk duo has been on tour since early August and will be stopping through NOLA on their way back home and we want to share their music with you and your friends. Above is a video for their song "Lazy Bones" off of their full length, 'New Tales', put out on Team Science Records. Here's where they've been. 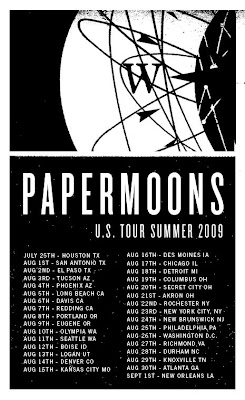 Giant Cloud is a new band on Park The Van Records that recently moved here to New Orleans and here's what they have to say for themselves:
"Giant Cloud condensed somewhere over Lincoln Parish, North Louisiana in the summer of love, 2008. That same summer, a sweaty, overcrowded Ford Windstar named Windy caravaned most of them through the triumphs and trials of the great American West as they busked their way from and back again to Ruston. Slightly dazed and confused, each brought back their own story, abstract sunburn and new love for the freedom of an open highway. They came home to a new house never lacking people willing and ready to play music, a new music room with an absurd amount of outlets and a whole maze of house in which to experiment with new things. Impressed with their own perception, they decided to live the life of traveling cantantes, touring the universe inciting dance riots and spreading the gospel of soft/loud/soft/loud rock 'n' roll."

Here's video of them live:

Sound like fun? Come thru this coming tuesday, September 1st at Circle Bar at 9 or 10 pm or something.
Posted by Chris at 3:07 PM